Never Mind The Bollocks by the Sex Pistols

"I had no reason to be here at all / but now I got a reason / it's no real reason"
The reason I'm here is to write about 15 albums. After reading a meme on Facebook I thought I'd give it a go: list 15 of your fave albums in 15 minutes ( I did it in about 4 ) - but I'm going to go further and blog about them. They may not all be the most famous or popular records ever, but they're obviously special to me seeing as they barged their way into my head before any others. This blog won't be just a list of great songs but a personal look at music and what effect it's had on me. And who the Hell are you, I hear you ask?
On this 'ere internet I'm known as cerebus660 and I have another blog called The Glass Walking-Stick, where I witter on about this and that and the other. You might like to check it out sometime, if you haven't already.....
But right here, right now, we're looking at one of the most controversial, incendiary, nasty and downright fantastic records of all time. And one that has the lovely word "bollocks" in the title. Which was obviously a major selling-point for snotty young urchins who wanted to smash the system. Like me. 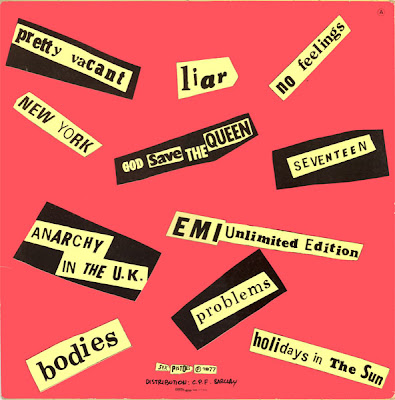 Well, actually, that's not true. When this record came out I was 10 years old and my musical tastes ran about as far as Abba and the Barron Knights. ( Hideously Embarrassing Musical Confession No.1 - collect 'em all! ) Music hadn't really impacted on me so far; I was more into comics, Doctor Who, dinosaurs, that kind of thing. I'd liked the Glam Rock bands ( Sweet, Slade etc. ) and some songs by Bowie, Queen, Thin Lizzy etc. when they had appeared on Top Of The Pops. But that was about it. I don't think we even owned a record-player at this point. Punk Rock, as far as I was concerned, wasn't music at all, just some strange racket played by very scary- looking weirdos who I'd cross the road to avoid.
I first really noticed the Sex Pistols in 1980 when I was properly getting into music for the first time, at the age of 13. Radio 1 were broadcasting a documentary series called 25 Years Of Rock which interspersed pop/rock music and news headlines from each year from 1955 to 1980. This was a great education in rock music: I first heard bands like the Kinks, Hendrix and the Stooges here, in bite-sized chunks. In one installment I heard this song which I thought was called Anarchy For The UK drowning out a speech by future Prime-Monster Maggie Thatcher - it was bloody brilliant! Atop a raw, grinding guitar sound there was that voice: the snarling, sneering, sarcastic tones of Johnny Rotten, once heard never forgotten. Perhaps there was something to this Punk Rock after all..... 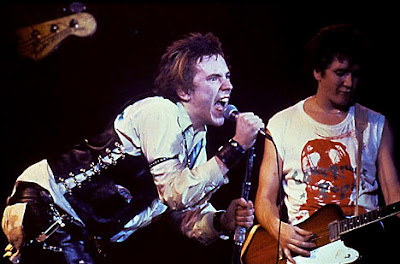 After dipping my toes in the Pistols' back catalogue with the Stepping Stone single, I dived right into the Punk Bible, Never Mind The Bollocks. ( Talk about mixed metaphors - how do you dive into a bible? ) It was all there: the attitude, the nihilistic lyrics, the bone-crunching sound, Jamie Reid's artwork, Lydon's spleen-venting voice. ( It took me quite some time to figure out that Johnny Rotten of the Pistols and John Lydon of Public Image Ltd. were the same person. ) To my young ears the album was a whirlwind of excitement, rebellion, creative swearing and huge tunes. I was hooked.
Quicker than you can say "Filthy Lucre!" Never Mind The Bollocks became my favourite album and the Pistols my favourite band. I became obsessed with the whole Rock 'n' Roll Swindle, buying whatever Pistols records, books and old magazine clippings I could get my hands on. Typically for me I fixated on a band that were already dead ( literally, in Sid's case ) and gone, but I didn't care. The Sex Pistols were mine now and always would be.
Song to play whilst smashing the system: God Save The Queen
Posted by cerebus660 at 15:19