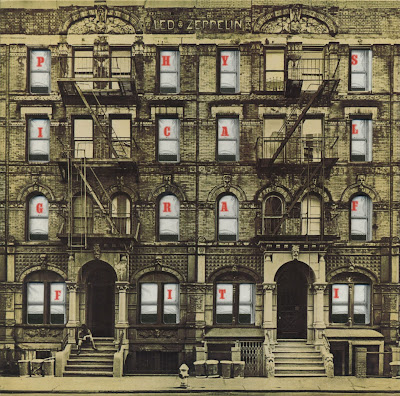 As part of what seems to be a recurring theme on this 'ere blog, Led Zeppelin were one of those bands ( like the Beach Boys ) that I just didn't get when I was younger. To tell the truth I probably never gave them a chance.
I did go through a Heavy Metal / Rock phase as a teenager but Zeppelin were never a part of it. This was the era of the so-called New Wave Of British Heavy Metal when the singles charts were frequently raided by new bands like Saxon, Iron Maiden and Def Leppard, all incongruously competing for space on Top Of The Pops with the likes of Bucks Fizz and Spandau Ballet. The old guard metal bands had a resurgence too, with Ozzy Osbourne, Rainbow, Judas Priest, Motorhead and Gillan all having hits and appearing on telly - unlike Zeppelin who famously didn't release singles and didn't "do" TV. It didn't help that Led Zep had effectively died along with their heavy-drinking drummer, John Bonham, in 1980; although you wouldn't have thought that at the time, when the Zeppelin logo and "Swan Song" symbol was still covering T-shirts, jackets and schoolbags across the land. Around this time I discovered another defunct band, Deep Purple, whose compilation album Deepest Purple became a real favourite for head-banging and air-guitar. They, along with Motorhead, became the only Metal bands to outlive my short-lived 'ed-bangin' phase, at least until Metallica and Anthrax came along some time later.....
The only Led Zep songs I knew at the time were Whole Lotta Love which I quite liked and Stairway To Heaven which I thought was the worst kind of cod-mystical, hippy tripe. I also got it into my head that Jimmy Page's guitar was permanently out of tune ( that's how it sounded to me, anyway ) and decided to stick with Richie Blackmore instead. 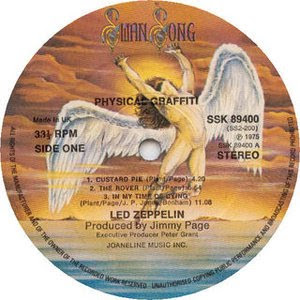 Years pass, pages are ripped from the calendar, leaves fall from trees etc. etc.
After seeing old black and white footage of Zeppelin performing Communication Breakdown on some late-night rock programme, and realising i'd been missing something, I decided to shelve my age-old prejudice and give 'em a go. I bought the first two albums on dodgy old vinyl and was knocked out by their hard rockin', bluesy power: subtle as a flying brick but compelling and electric. Typically for me, I then became obsessed with the band and went out to buy as much of their music as I could find - even the DVD of The Song Remains The Same which I still haven't managed to watch all the way through.
All the Zeppelin albums have their great songs, riffs and performances ( especially Led Zeppelin IV, their most iconic record ) but my personal favourite is Physical Graffiti, because it's such a sprawling, confident document of a band at the peak of their powers. ( Not bad for a double album featuring seven songs left off previous records. )
What's it got? It's got the lot. To start with, you've got yer full-on, brutal rockers like Custard Pie, The Rover and The Wanton Song which could be the blueprint for an entire career for a lesser band ( Hi AC/DC! Hi ZZ Top! ) but are just the starting point for Led Zep. There are more chilled-out, mellow tracks such as the country-fied Down By The Seaside and the acoustic workout Bron-Yr-Aur - which I think is Welsh for "getting stoned in a cottage somewhere". And then you have the epics like Ten Years Gone, In The Light and the awesome, exotic Kashmir. After all that they still find time for some rock 'n' roll tomfoolery in Boogie With Stu, gritty funk-rock in Trampled Underfoot and the monolithic, slide-guitar blues explosion of In My Time Of Dying. 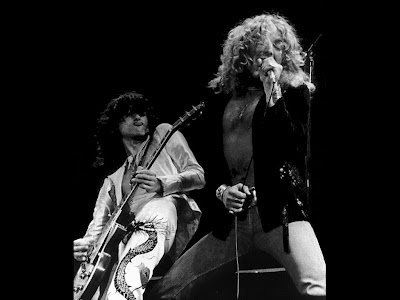 Needless to say the musicianship is faultless but never too slick or bland. The sheer power and variety of the music on display here is dazzling, with every member contributing something vital to the big picture. My only real complaint with this album, and Zeppelin's work as a whole, is the relative weakness of the lyrics.
( Not to mention the rampant sexism! )
Kashmir and Night Flight are the stand-outs for me, but a lot of the words of other songs don't stand up to much scrutiny. I tend to think of the lyrics as just another component of the overall sound, and just enjoy Robert Plant's lascivious, lung-busting vocals as if they were an instrument in their own right.
It took me a long time but I think I finally "get" Led Zeppelin, and they've "got" me. For life.
Song to play when you book that package holiday: Kashmir
Posted by cerebus660 at 05:25