Are You Experienced by The Jimi Hendrix Experience 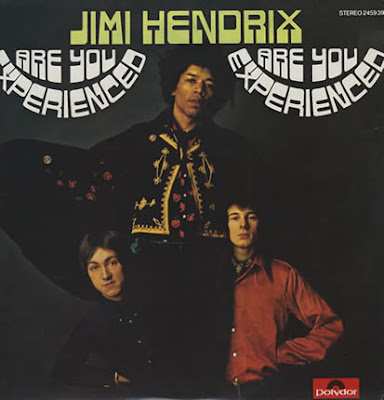 Unusually for me, I can pinpoint the exact moment I first, er, experienced the music of Jimi Hendrix. Well, I say "exact", but it was actually some time in 1980, so not that exact but I know it was on BBC 2, on the Old Grey Whistle Test and it was this awesome demolition of the Troggs' Wild Thing. What I wanted to know was - who was that flamboyant, exciting guitarist, and why was he shagging his guitar..... and not getting arrested?
I'm pretty sure that piece of footage showed up a few times over the years and I even managed to record it on audio cassette ( yes, it was the dark ages! ) and played it until the tape wore out. I had to find more of the man's music. Luckily for me Radio 1 produced a few documentaries like 25 Years Of Rock, which featured more of Jimi's music, and a special on the Hendrix story by legendarily gravel-voiced DJ, Tommy Vance. I was hooked! I went out and bought all the second-hand Hendrix singles I could find, then it was album time..... 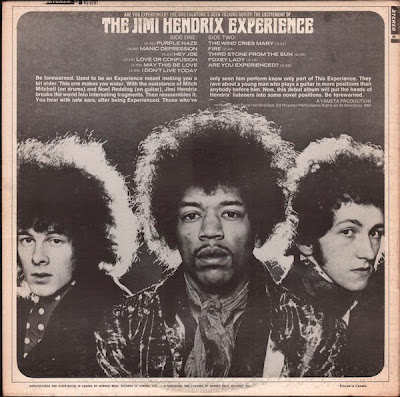 Sadly, Hendrix only released three studio albums in his tragically short life. In reverse order they are:
Electric Ladyland - the ambitious, self-indulgent but brilliant double-album, showcasing Jimi's new-found recording-studio skills ( in his brand-new studio! ), long trippy jams, and lyrics about voodoo children and mermen.....
Axis: Bold As Love - Jimi as High Priest of psychedelia and Hindu love god (!) ( see album cover ) dispensing beautiful songs of love 'n' peace 'n' good vibes.....
Are You Experienced ( no question mark required ) - the album in, er, question, one of the greatest debut albums ever, the Experience seemingly fully-formed and firing on all four cylinders..... 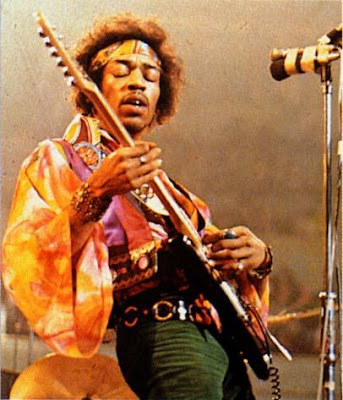 Although hinting at the full-on psychedelia to come, with plentiful distorted, backwards and feeding-back guitar, this album is much harder and angrier than its successors, with a distinct lack of mellow good vibes. Hendrix was still indebted to his previous employers from his hired-hand days on the "chitlin' circuit" and beyond - Jackie Wilson, The Isley Brothers, Little Richard, Curtis Knight and more. From these hard-working days for tough bosses in front of wild audiences Jimi acquired his stage-moves, showmanship and an understanding of r 'n' b and the blues.
The blues permeates Are You Experienced, giving the album its bite. Song titles like Manic Depression, Love Or Confusion and I Don't Live Today tell their own tales, hard luck stories of the pitfalls of life and love. The classic Red House is an out-and-out blues, albeit one with a sense of humour - after returning to the "red house over yonder" to find his girl vanished, Jimi concludes:
"If my baby don't love me no more
I know her sister will"
Apart from hard times the other main preoccupation of the blues is, of course, sex. And this album has that in spades. From the suggestive album title itself, through Hendrix's sensual, smouldering guitar playing and on through his languid, laid-back vocals, this album is one big come-on, playing on Jimi's sex-symbol status and his perceived "threat" - at least as far as the institutionally-racist media of the day were concerned.
"Listen here, baby / Stop acting so crazy
You say your mom ain't home / that ain't my concern
Just don't play with me / And you won't get burned
I have only one burning desire / Let me stand next to your fire"
A melting-pot of soul, r 'n' b, blues and the new psych-rock, Are You Experienced was so far ahead of the rest of the rock world in 1967 ( yes, even the Beatles too ) that it was as if its creator had just landed from some distant, freaked-out planet in a far-off, multi-coloured universe. And maybe he had..... 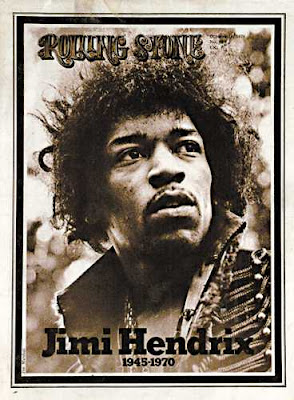 "Not necessarily stoned, but beautiful....."
Song to remind you of Wayne's World: Foxey Lady
Posted by cerebus660 at 12:38