The Band by The Band 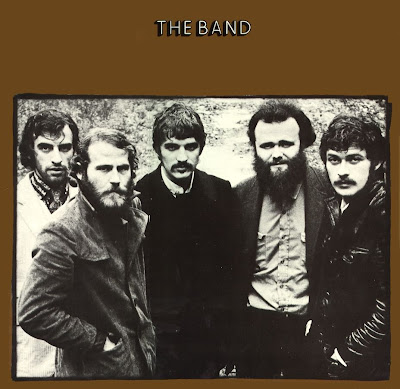 The Band's music used to be a mystery to me. And then it became a myth, or maybe a legend..... 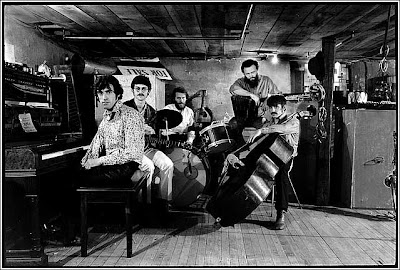 When I was a kid I used to occasionally hear their songs, but I never knew who they were or what they were singing about. This might not be an unusual problem for a band ( or Band ) who seemed almost deliberately anonymous, whose music was in a genre all of its own, who didn't really fit in anywhere.
My first exposure to the Band's music came ( improbably enough ) from a James Last album called "Rock Me Gently - A Tribute To The Great Canadian Songwriters." This collection of easy-listening / big band versions of pop hits featured songs by R Dean Taylor, Gordon Lightfoot and one Jaime "Robbie" Robertson, composer of The Night They Drove Old Dixie Down which, in this incarnation, was a full-on faux-Nashville singalong that sounded like a Tammy Wynette cast-off. So, my parents' album of middle-of-the-road German dance-band music introduced me to what would, much later, become one of my favourite songs of all time.
Years later, Radio One's Mr. Cheese, Simon Bates, would often play Band songs on his oldies show, the Golden Hour. I became aware of classics such as Rag Mama Rag, The Weight and Rockin' Chair, although I didn't know who was behind them. I can remember listening to The Night They Drove Old Dixie Down and being puzzled by the song: what was it all about? why are the people singing and the bells ringing when the singer sounds so sad? and what is a Dixie anyway? The mystery continued..... 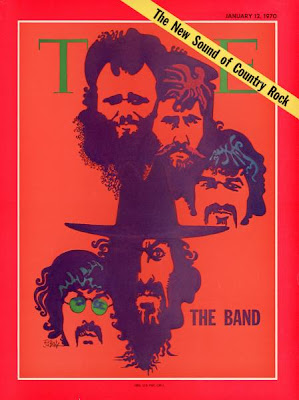 Even more years later I bought my wife Sarah a Summer Of Love-type '60s compilation tape for her birthday ( yep, an actual cassette - it was a while ago..... ) and amongst all the usual suspects - Byrds, Mamas and Papas, Donovan, Jefferson Airplane etc. - there was a strange little song called The Weight by a band called..... er, The Band. I sort of remembered it from years ago but I'd never really listened to it before. The haunting guitar intro, the ragged but beautiful harmonies, the mysterious lyric: all these seeped into my brain and I became hooked on the song, had to keep rewinding and playing it again. There had to be more. I learnt from magazines like Mojo and Uncut that The Band, those four Canadians and one Arkansas boy, had been a former backing band to small-time rockabilly legend Ronnie Hawkins, before going on to back Bob Dylan during his "going electric" period, retreating to a basement to write their own songs, and finally emerging as artists in their own right with Music From Big Pink, one of the most celebrated debut albums of all time. I caught a late night showing of The Last Waltz, the Martin Scorsese-directed film of the group's last gig ( trust me to do things arse-backwards ) and was knocked out by the songs, the atmosphere, the dynamics, the fantastic vocals of Richard Manuel, Levon Helm and Rick Danko. Surely it was now time to actually buy some of this stuff!
The Band by The Band, the so-called "Brown Album", the cover a sepia-tinted photo of five grizzled, pissed-off guys ( farmers? prospectors? bandits? ) standing in the rain in some forgotten, backwoods corner of America. The songs themselves are hazy, faded snapshots of half-remembered lives and loves; a whole cast of characters, maybe all living in the same dirt-poor town at the end of a lonesome trail, all with tales to tell. The jittery lover asking his girl where she's hidden her gun, the farmer praying for a good harvest, the unrepentant thief, the two old sailors dreaming of a life ashore, the good-time girl who lives to dance, the young Confederate soldier recounting the fall of the South..... 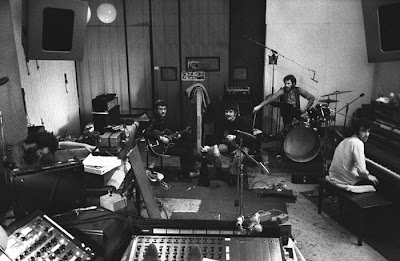 All of these characters and stories are brought to life by The Band's warm, organic, rootsy style: a rich stew of country, r 'n' b, soul, gospel and funk, with a dash of rock 'n' roll. Fiddles, horns and keyboards add colour and texture; lines are traded between the three ( wonderful ) singers; instruments are swapped around to suit the song, not the performers' egos; traditional rock 'n' roll excesses are curbed - the song is everything.
The Band brought a new perspective to rock 'n' roll ( although some would say a conservative one ) - when everyone else was turning on, tuning in and dropping out, they were reaching into the past for a feeling of community, history and shared experience. A song like The Night They Drove Old Dixie Down was something unprecedented at the time: a lament for a lost way of life and for a people that had fought for the "wrong" side and paid the price. Even up-tempo, rocking songs like Up On Cripple Creek and Jemima Surrender still somehow had that "old-fashioned" sound that led to the record being referred to as "the best rock 'n' roll album of the nineteenth century."
The beauty and strangeness of The Band's "old, weird America" stays with you and becomes a part of your own interior landscape, a window on another world. And that's no mystery.
Song to whistle down a country lane: King Harvest Has Surely Come
Posted by cerebus660 at 11:14