Psychocandy by The Jesus & Mary Chain 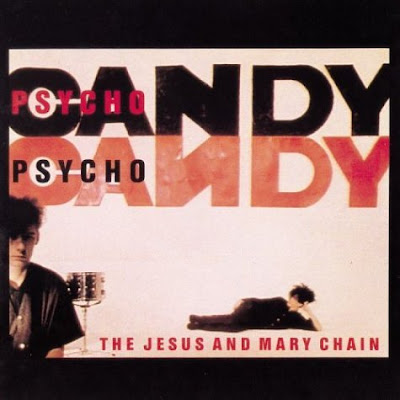 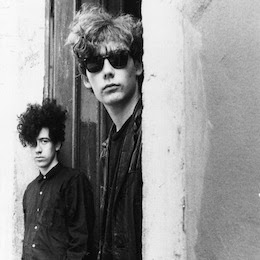 Unusually for me I got into The Jesus & Mary Chain from day one. Well, from single number one, anyway. I bought their debut Upside Down / Vegetable Man 7" from The Trading Post record shop in Stroud ( one of my main haunts as a teenager and, amazingly, still going today ) and was knocked out by its grinding, migraine-inducing, feedback-ridden guitar sound, doom-laden drums and droning vocals. Ever since hearing Adam & The Ants' guitarist Marco Pirroni using feedback as part of his unique sound, I'd thought it would be cool to crank up that screeching sound to the max and build songs around it. And here were these snotty young punks from Glasgow doing just that. ( Of course, I hadn't heard of the Velvet Underground at this point. ) And, as if the music wasn't great enough on its own, the band looked amazingly cool and permanently pissed-off, played controversially short gigs that often ended in "riots", and seemed to be on a mission to antagonise tabloids, other bands, the music press and their own record label. Perfection.
More brilliant ( and slightly slicker ) singles followed: the intense, angry Never Understand, the more intense and more angry You Trip Me Up, and the less angry but still intense Just Like Honey. For some reason I really thought You Trip Me Up would be a massive chart hit in the summer of 1985 - surely the UK's pop kids would hear more than just the squalls of feedback and realise what a classic pop song it was? Er, no. It actually reached the dizzy heights of no. 55 in the chart. I still remember some journalist on Radio One's Newsbeat referring to the Mary Chain's music as "feedback and not much else" at the height of their "New Sex Pistols" notoriety. Of course, that sense of dismissal would only make their fans close ranks and love them even more fiercely.
And then came the album..... 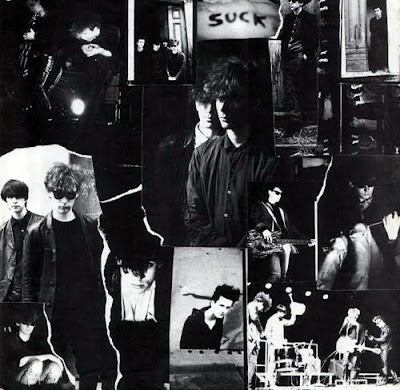 Psychocandy surely stands as one of the greatest debut albums in rock. The fact that the Mary Chain never really scaled such heights again only adds to its grandeur. The album really shouldn't work: it's a still-startling mash-up of seemingly disparate elements - the squealing white noise, the Phil Spector / girl-group drumming, the "poor me" indie vocals, and lyrics like these:
And the sun don't shine
And all the stars don't shine
And all the walls fall down
And all the fish get drowned
.....yeah, OK. In fact, the brothers Reid were/are deeply in thrall to age-old rock 'n' roll themes of disillusion, rebellion, doomed love and heartache. In these songs women are beautiful but treacherous ( You Trip Me Up, The Hardest Walk ), life is hard ( Something's Wrong, It's So Hard ) and even the rock 'n' roll dream of escaping on a big, black motorbike ( The Living End ) ends in disaster - "My head is dripping into my leather boots". Jim Reid's American-via-Glasgow vocals are full of hurt and hunger, throwing none-more-rock " Hey hey hey"'s all over the place like a Scottish Joey Ramone; while William Reid's six-string screams of feedback are more carefully-sculpted than is at first apparent, some beautiful melodies lurking beneath the waves of surging sound. Amongst all this chaos and confusion they find a dark, bleak ( not to mention pretentious ) poetry:
Love's like the mighty ocean
When it's frozen
That is your heart
or
I never thought that this day would ever come
When your words and your touch just struck me numb
And it's plain to see that it's dead
This thing's losing blood
On this cool sunny day
or that indie-disco favourite:
Listen to the girl as she takes on half the world
Moving up and so alive
In her honey-dripping beehive
No, I don't know what it all means, but it sounds fantastic, fatalistic and painfully adolescent. The whole album is a gloomy teen's dream of love and angst and anger, but it still sounds exciting and energising to this ( gulp! ) forty-something. The Mary Chain would grow up and calm down on their second album, Darklands, which produced such classic singles as April Skies and Happy When It Rains, but couldn't hold a black, patchouli-scented candle to Psychocandy.
Song to play after being stabbed through the heart by an icepick of emotion: You Trip Me Up.
Posted by cerebus660 at 12:00