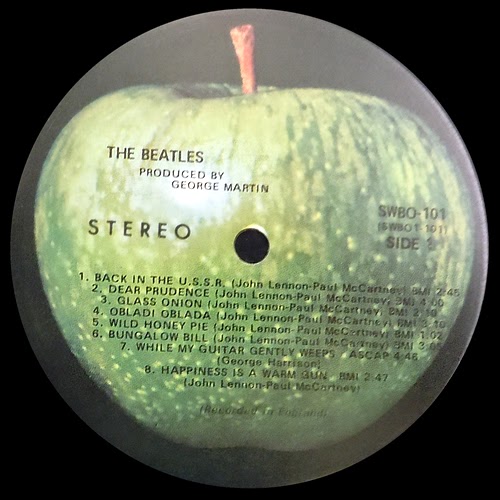 While the world waits with bated breath ( whatever that means ) for the next pulsating post on this absurdly inconsistent blog
( Album number 15, The Soft Bulletin ) I thought I'd share with you a favourite albums list from the mighty John Pitt. John has been a very generous supporter of my half-baked blogging efforts, both here and over at The Glass Walking-Stick, so it's a pleasure to present his rundown of Classic Rock, complete with liner notes. Take it away, Mr P...

The Beatles - the White Album
John Lennon - Imagine
Paul & Wings - Band On The Run
The Stones - Through The Past Darkly -( now I know this isn't a studio album, but a collection, but I chose this for nostalgic reasons )
The Who - Tommy
T. Rex - The Slider
David Bowie - Hunky Dory
Slade - Old, New,Borrowed & Blue
Queen - A Night At The Opera
Rod Stewart - Never A Dull Moment
Cream - Disraeli Gears
Led Zeppelin - II
Pink Floyd - The Wall -( I did have Hendrix's Are You Experienced, but someone beat me to it!)
Simon & Garfunkel - Bookends
Paul Weller - Stanley Road.
So there you have it - nowhere near as diverse a choice as yours, but, hey, I am an old-timer, after all!

I have to confess that I only own three of those albums myself
( Bowie, Zep and Floyd ) but I could certainly see myself parting with a few quid for a handful more  -  Band On The Run, Disraeli Gears and A Night At The Opera are all albums that I've always meant to buy but not actually got round to. Must try harder :-)
Thanks again to John for his list and if anyone else would like to comment on these albums or send me a list of their own faves please feel free to do so.