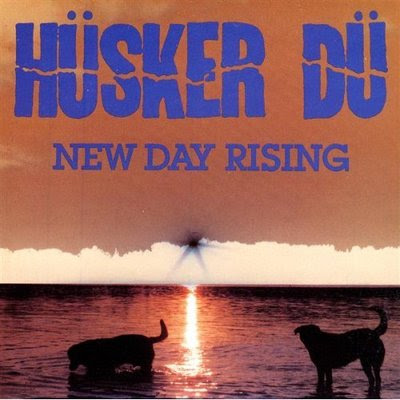 OK, up until now this 'ere blog has concentrated on albums that are generally thought of as "classics" and are often found on "Best Of" lists from the great and good..... and music journalists.
But this time I'm going for a more personal, less well-known choice, Husker Du's mid-'80s hardcore milestone, New Day Rising.
Husker Du were Bob Mould ( vocals, guitar ), Grant Hart ( vocals, drums ) and Greg Norton ( bass, moustache ) - with both Mould and Hart writing the songs..... something which would lead to friction over the years and contribute to the band's demise. They formed in Minnesota in 1979 and, as contemporaries of bands like The Minutemen and Black Flag, were initially a very fast, thrashing Punk/hardcore band. Their first ( live ) album was called Land Speed Record, which pretty much summed up their musical philosophy at the time.
Before long, however, they began to break out of the hardcore straitjacket and introduced more melody and variety to their sound. The mini-album Metal Circus pointed the way towards the "grunge" sound of the '90s ( especially on Hart's murder ballad Diane ) and the ambitious, sprawling double Zen Arcade was actually a ( whisper it! ) concept album which dabbled in psychedelia. As the band became more popular the major record labels came calling but, before their temporary step up to the big leagues, they produced one last classic for their old label, SST: New Day Rising. 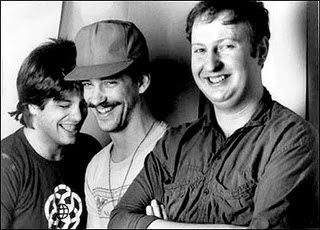 It starts with a restating of their hardcore credentials: Mould and Hart shouting, screaming and howling the album title over a barrage of thunderous drums and squalls of guitar. As attention-grabbers go, it certainly works. Then we're straight into the new, poppier Husker Du sound, with Hart's The Girl Who Lived On Heaven Hill, boasting a huge, singalong chorus. Well, I say "poppier" but, by the end of the song, Hart's screaming his head off again, from up there on the top of Heaven Hill. Mould's I Apologise follows, anticipating the emo genre with its brutal dissection of a relationship going wrong.
And that's one of Husker Du's great legacies - they had moved beyond the punk cliches of earlier songs like Deadly Skies and Obnoxious and were now talking about the joy and pain of real life. Over top of some bloody loud guitars, of course. The three songs which close side one of the album ( vinyl forever! ), If I Told You, Celebrated Summer, and Perfect Example are fantastic, er, examples of the Husker Du methodology - heart-aching lyrics welded to great tunes and Bob Mould's shimmering, multi-tracked guitars.
"Do you remember when the first snowfall fell
In such a celebrated Summer?"
But just when you think it's all got too grown up and sensible, the band hit us with the bizarre discordance of How To Skin A Cat, the redneck anthem Whatcha Drinkin' and Grant Hart's piano-assisted alternative pop classic Books About UFOs. And to finish we get the almost compulsory Bob Mould guitar freak-out. On Zen Arcade the band had produced a 13-minute, experimental epic, Reoccurring Dreams; here they were less self-indulgent and Plans I Make is a mere 4 minutes of chainsaw guitars, feedback and Mould's anguished vocals.
Sadly, Husker Du imploded a couple of years later, following drug problems, creative tensions and the suicide of their manager. They'd only achieved moderate success, even after signing to Warner Brothers and seeing their last album, Warehouse: Songs And Stories, being relentlessly hyped by the music press. Mould and Hart pursued solo careers with varying success and Norton went into the restaurant business, with only the occasional return to music. They were, however, a huge influence on the next generation of alternative rock ( Pixies, Nirvana etc. ) and on such big-business "punk" bands as Green Day. ( Not to mention the legendary Death Planet Commandos. Well..... they're legendary in my house, anyway. )
Not bad for a group named after a kids' board game.....

Song to annoy the neighbours: New Day Rising
Posted by cerebus660 at 14:15